What Is Purging and Pressurization?

Purging and pressurization is a safe and cost-effective type of explosion protection that allows electrical equipment to be used in a standard enclosure in potentially explosive atmospheres. Find out more about the Ex p type of protection and the functional principle of pressurized enclosures in explosive gas and dust atmospheres in our blog article.

Purging and pressurization is an explosion protection method (Ex p) that uses compressed air or inert gas to eliminate and prevent hazardous substances such as gas, dust, or a combination of the two, from entering the enclosure and causing a fire or explosion. Purge and pressurization systems provide protection for standard ordinary location electrical equipment within a standard enclosure designed to operate in a hazardous area. Compared to explosionproof or flameproof protection methods, this protection concept is more cost-effective and prevents an explosion. The international standards IEC 60079-2 and NFPA 496 define the regulations for purged and pressurized enclosures for the protection of electrical equipment, such as switch and control cabinets, analysis devices, and large motors.

What Is the Pressurization Function Principle? 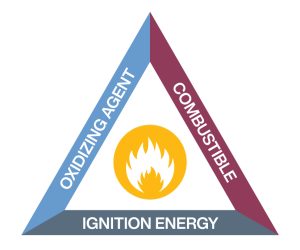 Due to this basic concept, ignition is not possible if the concentration of a material is below the minimum level, also known as the lower flammable limit or LFL. In other words, the oxygen content is not raised above the normal value for standard atmospheric conditions. The fact that all flammable or combustible materials have a minimum concentration that poses a fire or explosion hazard is one of the key concepts used in this method of protection.

Purging and Pressurization in Gas Applications

In general, pressurization maintains an area within the pressurized equipment that is well below the LFL of the surrounding, potentially explosive gas atmosphere. An enclosure containing ignition-capable equipment first undergoes a purge cycle. The intent of this is to flush the inside of the enclosure to the point where any remaining levels of gas trapped inside after the purge cycle are well below the LFL of the flammable or combustible material(s) for which the pressurized equipment is designed. Immediately thereafter, a positive pressure is maintained in the protected equipment relative to the surrounding, potentially explosive atmosphere. This positive pressure, known as minimum overpressure, prevents the surrounding, potentially explosive atmosphere from entering the now “clean” enclosure. Once the volume within the pressurized equipment is considered safe, energy can be applied to the ignition-capable electrical equipment within the pressurized enclosure and it can be operated normally. If the minimum overpressure level is lost, the system alerts the operating personnel to take immediate action, or the system initiates an automatic shutdown to ensure the safety of the equipment in the hazardous area. 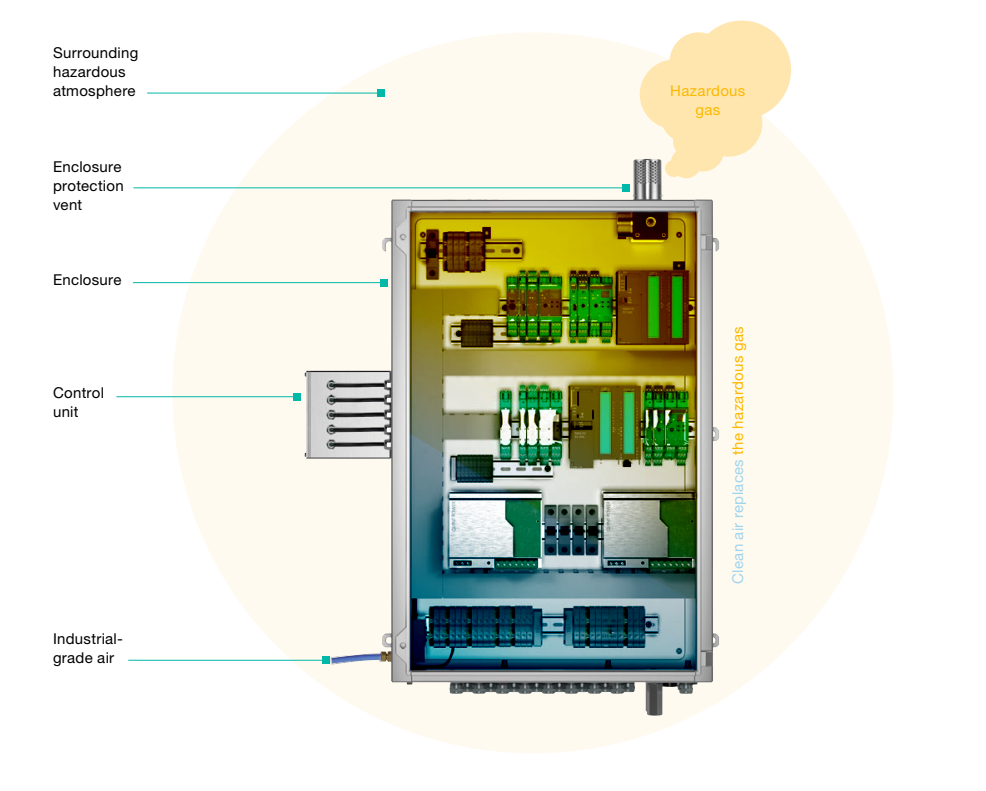 In addition to the three aspects in the ignition triangle above, dust explosions also involve confinement and dispersion. 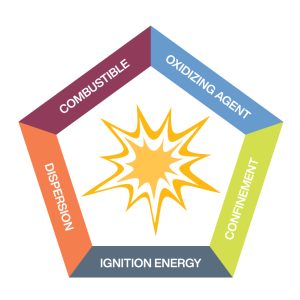 The ignition pentagon shows the five requirements for dust explosions.

In dust applications, the purge cycle is replaced by physical cleaning. This removes all hazardous dusts from the internal components of the pressurized equipment enclosure. The enclosure is then pressurized again.

A high airflow purge cycle is not used when purging an enclosure in a potentially explosive dust atmosphere. Two reasons:

The interior of the pressurized equipment must be cleaned in a manner that does not create a dust cloud. For example, using a vacuum cleaner is preferred over blowing out the equipment with pressurized air. Another consideration is that the vacuum cleaner may need to be classified for use in the hazardous area. Moreover, it is important to understand that all areas within the enclosure must be cleaned. This means that any dust inside the protected equipment must also be removed.

After cleaning the interior, the enclosure is closed and immediately brought to the required positive minimum overpressure. Once again, this positive pressure prevents the surrounding potentially explosive atmosphere from entering the now “clean” enclosure. Once the area inside the pressurized enclosure is considered safe, power can be supplied to the electrical equipment inside the pressurized enclosure to allow it to operate normally. In the event that the minimum overpressure level is lost, the system alerts the operating personnel to take immediate action or initiates an automatic shutdown in order to maintain the safety of the equipment in the hazardous area.

Knowledge Base for Electrical Explosion Protection—Purge and Pressurization

Download the basic explosion protection compendium "Type of Protection Purge and Pressurization" free of charge. The brochure offers useful information on the topic of purging and pressurization, such as the typical scenario of leakage compensation and special applications for gas and vapor analysis that work with a containment system (dilution). 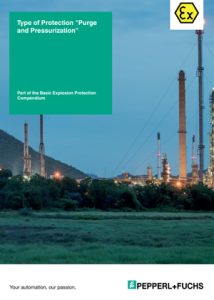