In early 2011, Pepperl+Fuchs released its first Data Matrix positioning system, the PCV absolute positioning read head. This 2-D camera system uses multi-redundant Data Matrix code tape to provide position data with submillimeter resolution. Along with position, it provides information on the Y-offset (movement up or down) and speed. Since its debut, the PCV has become a sought-after solution for accurate and reliable positioning in a variety of applications.

In 2017, Pepperl+Fuchs released the next generation of Data Matrix positioning—the PXV series. Based on the technology used in the PCV unit and combined with new hardware and concepts, the PXV comes along with performance improvements and new features.

How do they differ?

One significant difference is that the systems use different types of Data Matrix code tape. The PCV uses a smaller Data Matrix square (7 x 7 mm) and multiple rows to achieve redundancy. The PCV code tape is offered in one, two, or four-row configurations to increase tolerances or meet space constraints. This system only requires one readable Data Matrix square in the scanning window to determine absolute position. By increasing the number of squares in the field, redundancy also increases.

The PXV, on the other hand, uses a camera system capable of reading larger Data Matrix squares. It functions with a single row of 15 mm x 15 mm code squares, which can withstand comparatively more dirt and damage.

In addition, PXV offers a much larger scanning window. The 120 mm x 80 mm window allows the PXV to recognize several of the bigger Data Matrix squares to accomplish similar redundancy if Data Matrix codes are damaged or blocked. Again, only one code is needed to establish position.

Other advantages of the PXV camera upgrade include: 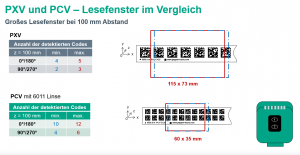 Now that the two major differences between the PXV and PCV have been discussed—larger code squares and an upgraded camera (field of view)—there are several other highlights to point out when comparing the two devices:

1. Is the PXV a drop-in alternative for the PCV?

No. As described earlier, the PXV read head uses a different style of code tape than the PCV system. If replacing PCV with PXV, the previously installed code tape must be swapped out with the larger Data Matrix square code tape.

There are currently no plans to discontinue the PCV system. Since the PCV has been sold for many years and a large number of devices are still in use, Pepperl+Fuchs will continue to offer and support PCV. Since the PXV is not a drop-in replacement, both read heads will be available moving forward.

3. PCV has been working perfectly fine for my application. Why should I switch to PXV?

In this scenario, we would recommend that you stick with what works for you. If you are satisfied with the PCV system, there is no need to switch over to PXV unless you want to take advantage of the upgrades and improvements described in this article. Pepperl+Fuchs is recommending PXV for all new installations, but upgrading pre-existing systems is up to the user.